So many teams complain about the "do nothing" retrospective. Team meetings can remain results-free for many reasons (possibly the topic of another post...and anyway, I'm sure Esther Derby must have written about it ;-) ).

However, one way to stimulate team members to implement action plans is to follow the energy.

Software teams usually have little difficulty identifying the things they wish were different in their work environments--processes, practices, team interactions, product owner interactions, or impediments that have resisted a simple fix. When a team has created a list of ideas for improvement on a flip chart or whiteboard, I ask them to filter it three ways.

First, I ask them to estimate the story size of the item, in points or T-shirt sizes. That gives everyone on the team a chance to notice how much effort one or more team members will have to give to take the action. And whether they think it's worth it. (A version of planning poker, described in my last post, helps the team to arrive at the story size estimate.)

Second, team members multi-vote (with dots or some other voting method) on the items they think will have the highest beneficial impact once implemented. We notice the pattern of votes, and write the total votes for each item on the list.

Finally, team members vote one more time. This time each person checks-in on his or her own levels of interest in every specific idea, and votes for up to two ideas that energize them the most. "What do you really want to make happen? Which idea(s) gives you energy?" They can vote twice for the same idea if their energy for that one is particularly high, or vote once each for two ideas.

When a team makes action planning decisions based on how much team capacity an action will require, what likely benefit they'll get from it, and, most importantly, what they really want to make happen, things get done. Improvements happen.

So, if your team is plagued by "do nothing" retrospectives, go for maximum impact and follow the energy. 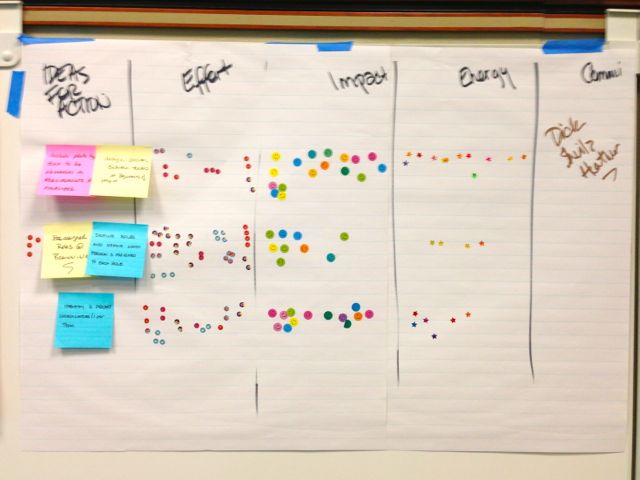